Story and photos by Josh Kouri

What does a skier buried under an avalanche have in common with a quarter-sized baby lizard scurrying about on Tinker Air Force Base? The survival of each may depend on a special tracking method known as harmonic radar. The Texas horned lizard (Phrynosoma cornutum), one of the most iconic reptiles found in Oklahoma, is also one of the state’s most threatened reptile species. Many Oklahomans have fond memories of catching these charismatic lizards during their childhoods but may not know that the species has suffered drastic declines since the 1960s. Now, successful conservation programs are key to ensuring future generations of Oklahomans can make the same memories. 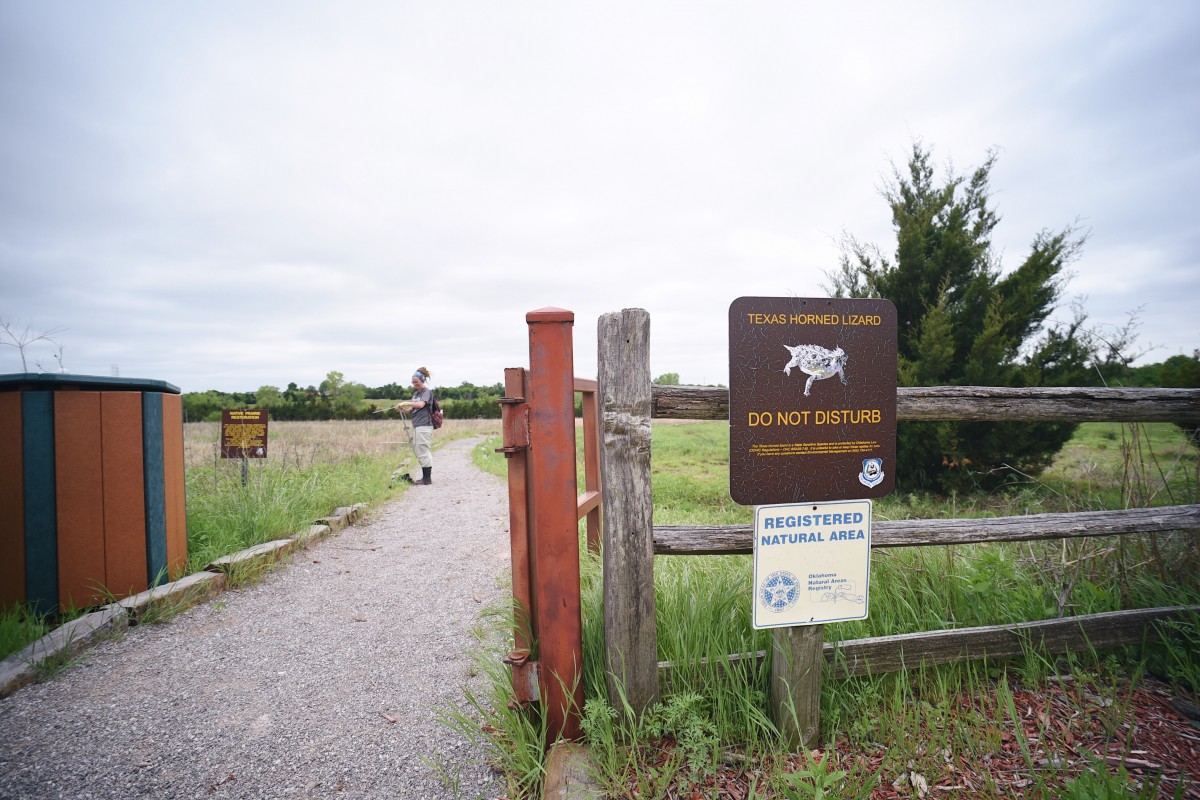 Horned lizards used to be common throughout the state but are now often limited to small, isolated populations surrounded by urban or agricultural areas. This decline is likely due to a combination of several factors. The development of land for farming and housing has reduced the amount of suitable habitat and the lizards’ small ranges reduce the likelihood that the species will recolonize an area from which it has been removed (the longest movements adults make each year are typically only 100-200 yards). Horned lizards also feed almost exclusively on ants, so when pesticide use reduces ant populations the lizards may lose most of their food source. Finally, the invasion of the imported red fire ant (Solenopsis invicta) reduces horned lizard populations directly (by eating eggs and hibernating lizards) and indirectly (by killing off the native ant species that the lizards rely on for food). While conservation of this species is a high priority, gaps in our knowledge of how the lizards move throughout their home range and use the available habitat present challenges for researchers designing management plans. 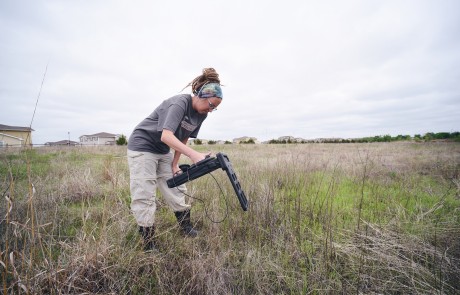 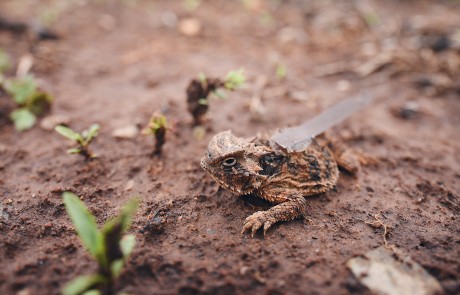 Horned lizards are especially vulnerable as hatchlings. The young lizards emerge from their nests in late summer and enter a world of danger. They must quickly find suitable habitat for catching ants and basking in the sun, while avoiding predators such as snakes, birds, and coyotes. Understanding how hatchlings move throughout their home ranges and select ideal habitats is key to implementing management plans that promote their survival, but the tiny, quarter-sized lizards are much too small to use traditional radio tracking technology. Now, one local researcher has a creative strategy for overcoming that challenge. 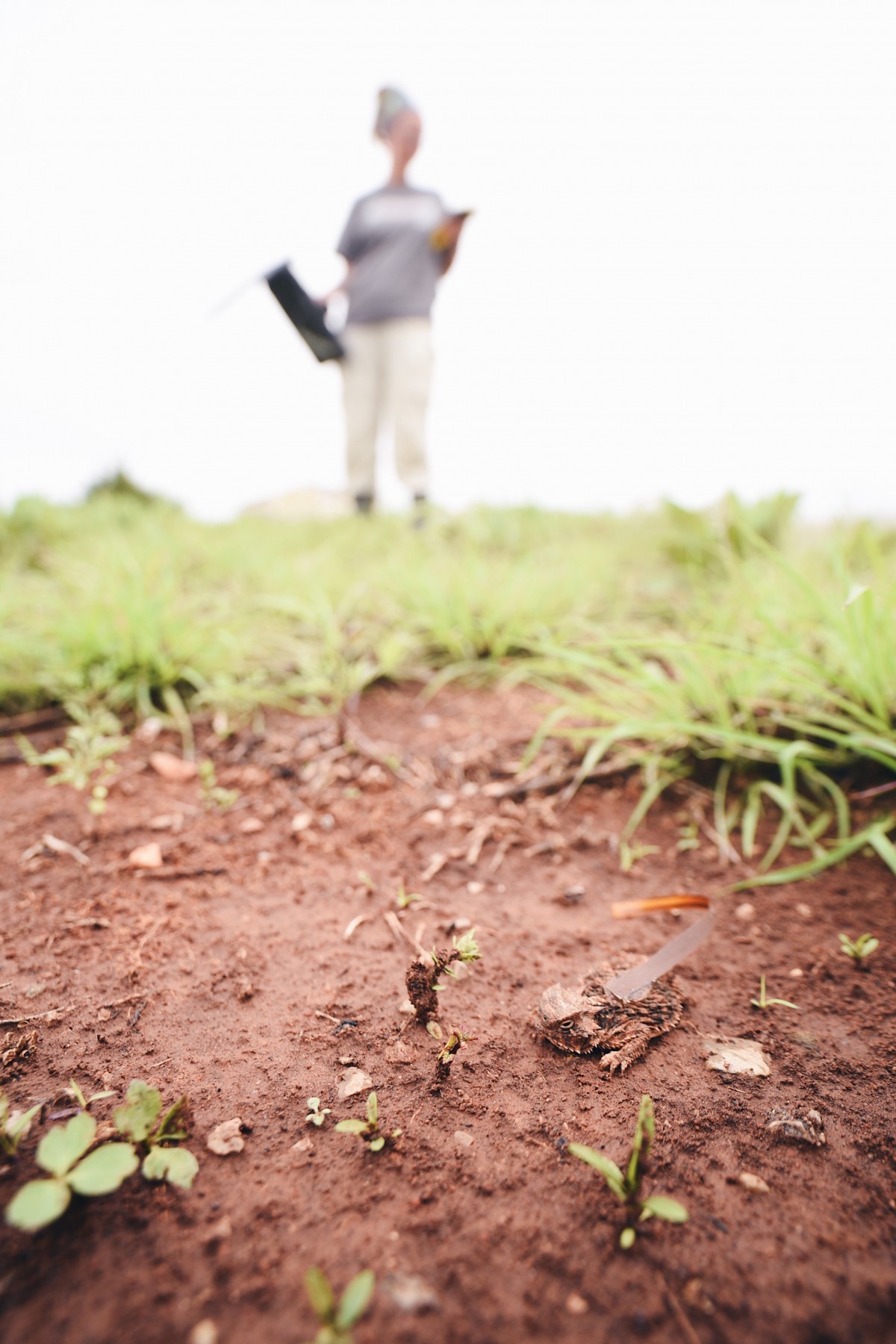 Miranda Vesy, a master’s student at the Sam Noble Museum at the University of Oklahoma, is among a pioneering group of researchers using harmonic radar technology to track the movements of animals that are much too small to carry a traditional radio transmitter. Using technology designed by Recco (a search-and-rescue company that invented the system for locating skiers trapped beneath avalanches), Miranda has been tracking hatchlings at a small natural prairie reserve in the middle of Tinker Air Force Base in Oklahoma City since 2014 to finally understand the movement patterns of the young lizards. 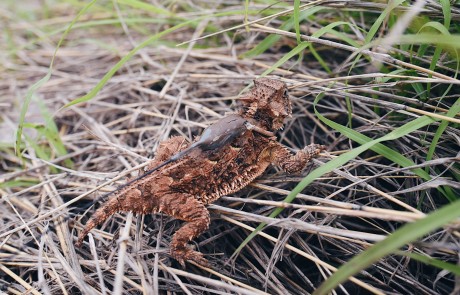 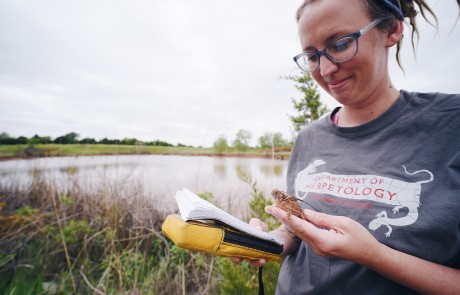 Early iterations of the project focused on basic questions about the Tinker lizards, such as the population size and its ability to survive relocation to more suitable habitat on base. As the project continued, it began addressing questions with greater conservation applications. Researchers have examined the effects of different management strategies and habitat maintenance techniques, studied the nesting behaviors of female lizards, and now track the movements and habitat preferences of both adult and hatchling lizards. 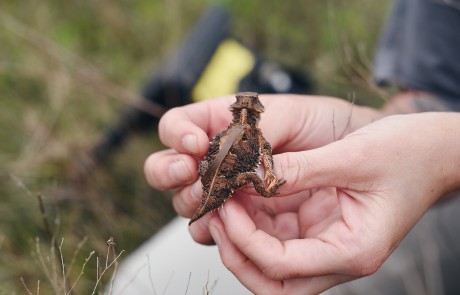 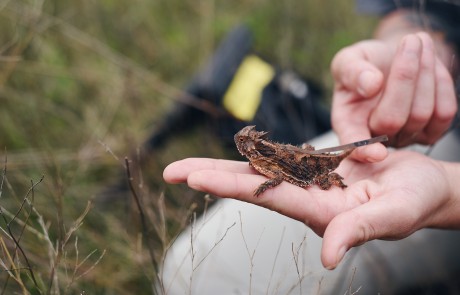 Miranda is addressing two questions with important conservation implications. First, what percent of hatchlings survive the three-month period between emerging from the nest in August and entering hibernation in October? And second, what microhabitats (small sub-sections of the ecosystem with unique environmental factors and resources) are most important to the hatchlings? Answering these questions will help Tinker, and other organizations that want to conserve horned lizards, to prioritize and manage the most important habitats. Harmonic radar tracking is key to answering both questions.

Harmonic radar is a two-part system equally suited to locating tiny animals or buried skiers. The key innovation of this system that makes it perfect for use on horned lizard hatchlings is the lightweight, passive reflectors it uses. The reflectors are tiny strips of plastic containing a diode and a loop of aluminum wire that are so small and light that they can even be attached to insects. The original reflectors were meant to be sewn into ski jackets or other equipment, but the modified reflectors can easily be attached to the back of a hatchling lizard. Once the reflectors are attached to the hatchlings, Miranda finds them by using a small handheld detector. This device sends out a search signal, which strikes the reflector on a hatchling and bounces back to the detector to emit an audible ping. Sweeping the detector over the prairie allows Miranda to triangulate the position of the hatchlings, usually locating them within a minute of detecting the first ping. 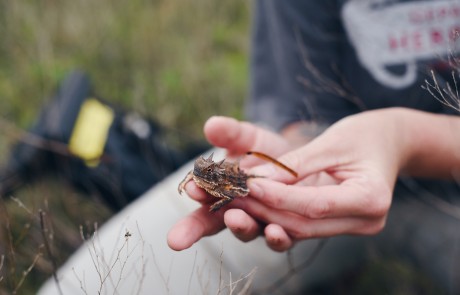 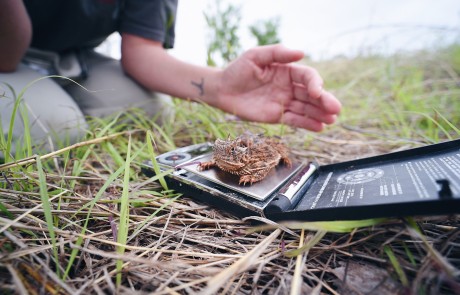 While the original Recco system could locate skiers buried under 30 meters of snow, the miniaturized system Miranda uses has a much smaller range. Nevertheless, she can easily locate all the tagged hatchlings in a section of prairie within an hour of scanning with the radar, a task that would be otherwise impossible given the lizards’ excellent camouflage. By assigning each hatchling a unique ID and recording GPS points each time they are located—including when Miranda and her team detected signals coming from inside a coyote den, a hawks nest, and the belly of a snake! —Miranda has been able to develop answers for her questions. 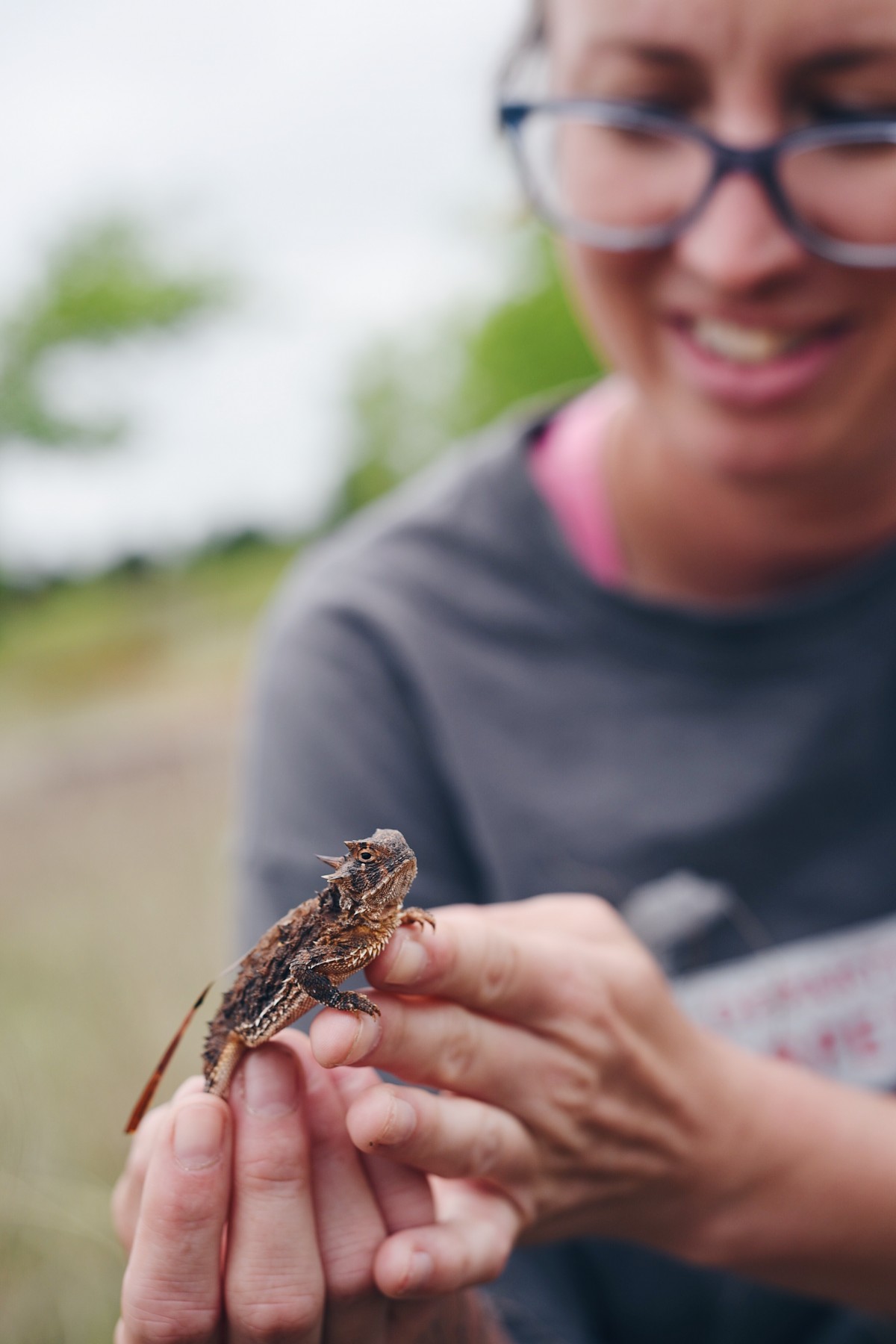 Although definitive conclusions will require more data and analysis, it appears that only about 30% of wild hatchlings survive long enough to enter hibernation. They also appear to prefer mosaic habitats, with patches of open ground interspersed with dense vegetation where they can hide from predators. This information is vital to refining management strategies to ensure healthy horned lizard populations in Oklahoma. 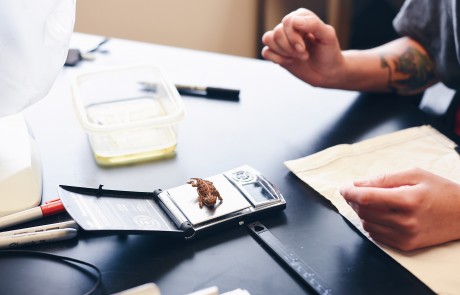 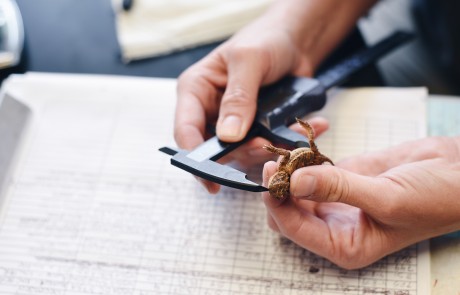 Since so few hatchlings survive their perilous first months of life, Miranda and other students at the Sam Noble Museum are developing a “head start” program to boost their survival. Hatchlings that survive their first hibernation are much more likely to reach adulthood, so capturing some hatchlings from the wild, rearing them in ideal conditions, and then releasing them back to their original habitat once they are larger could strengthen the population at Tinker. The baseline survival data Miranda is gathering will help determine if this is a viable conservation strategy.

Thanks to innovative researchers like Miranda, we are constantly improving our ability to answer new questions about the world around us. Many conservation challenges remain, but the people dedicated to solving them now have more tools than ever. 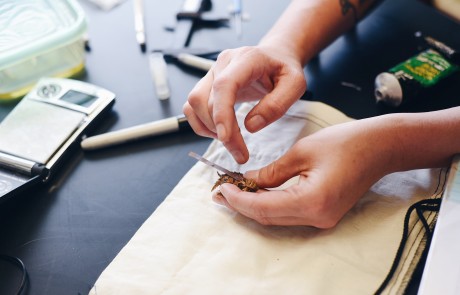 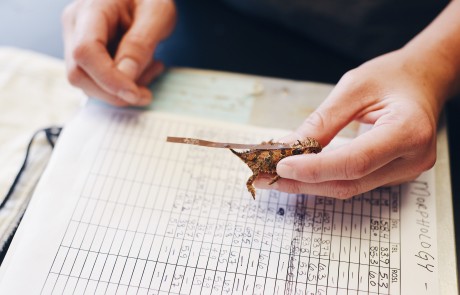 If you see a horned lizard in the wild, keep in mind that they are a protected species in Oklahoma and it is illegal to harm them, move them, or keep them as pets. The Oklahoma Department of Wildlife Conservation has an online reporting form for horned lizard sightings, so snap a pic and fill out the form online to contribute to state monitoring. https://www.wildlifedepartment.com/wildlife/wildlife-diversity/report-texas-horned-lizard-sightings/form 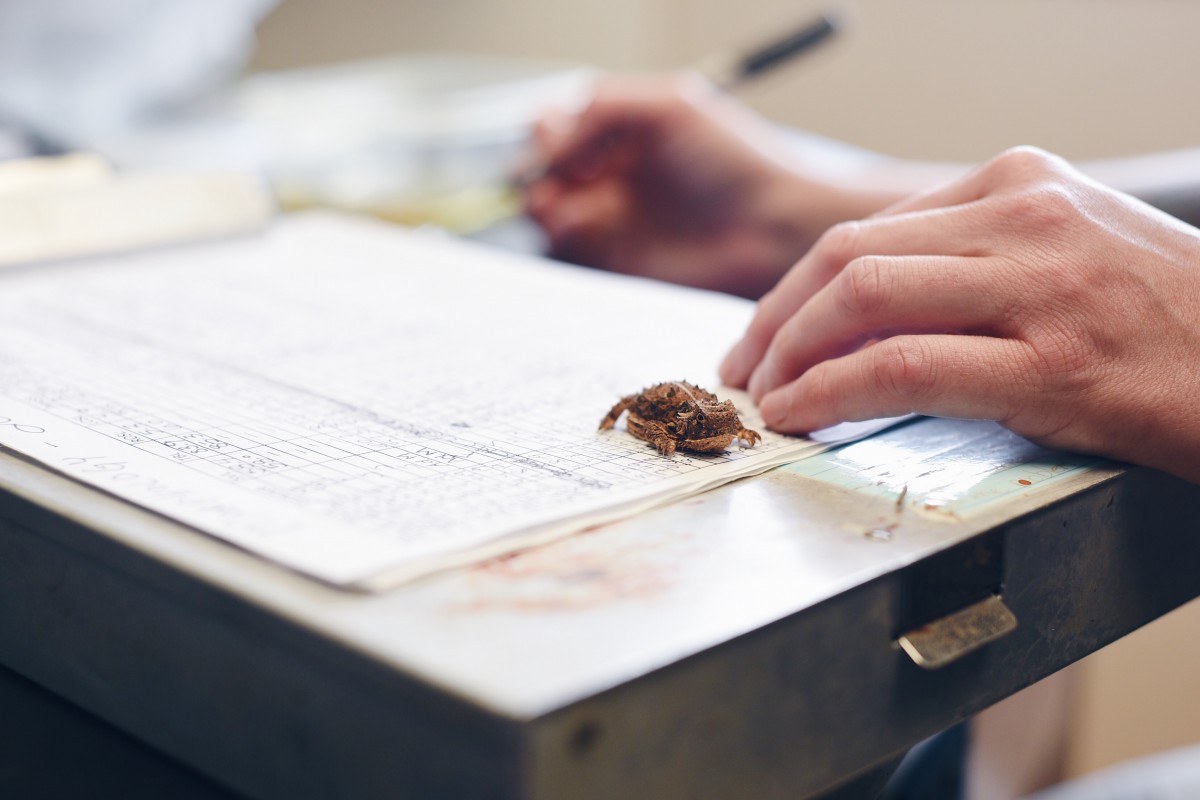